What a great weekend we all had at the Roxburghe golf club,the weather was not too bad and  the umbrellas were only up for a short period of time.

The Bronze championships was run as a stableford event and all 8 ladies enjoyed the challenge of the course, the runner up with 29 points was Marion Blades from Peebles and the 2017 "B" Champion was Doreen Pringle from Kelso with 30pts.    Congratulations  (css76/par72)

The first semi final was between Tara MacTaggart(Minto) and Julie Birdsall (Roxburghe) after a lot of great golf Tara won on the 17th.  The second semi between Judith Anderson(Hawick) and Leanne Wilson (Kelso) was again a very tight match going to the 18th with Judith the victor.
The championship final was played with great skill and determination with Tara MacTaggart winning on the 18th hole (1up) from Judith Anderson, some fantastic golf for all the spectators to enjoy.

Many many thanks to all supporters caddies and players without you all we would not have a championship.

Some of the supporters braving the elements today 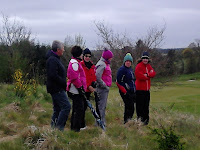 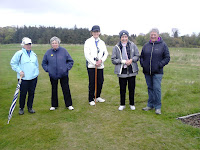